Torrevieja, the sunniest city on the Costa Blanca

Torrevieja is a cosy sunny city, washed by the Mediterranean Sea and located on the “White Shores” of Costa Blanca in the province of Alicante of the Valencian Autonomous Community. 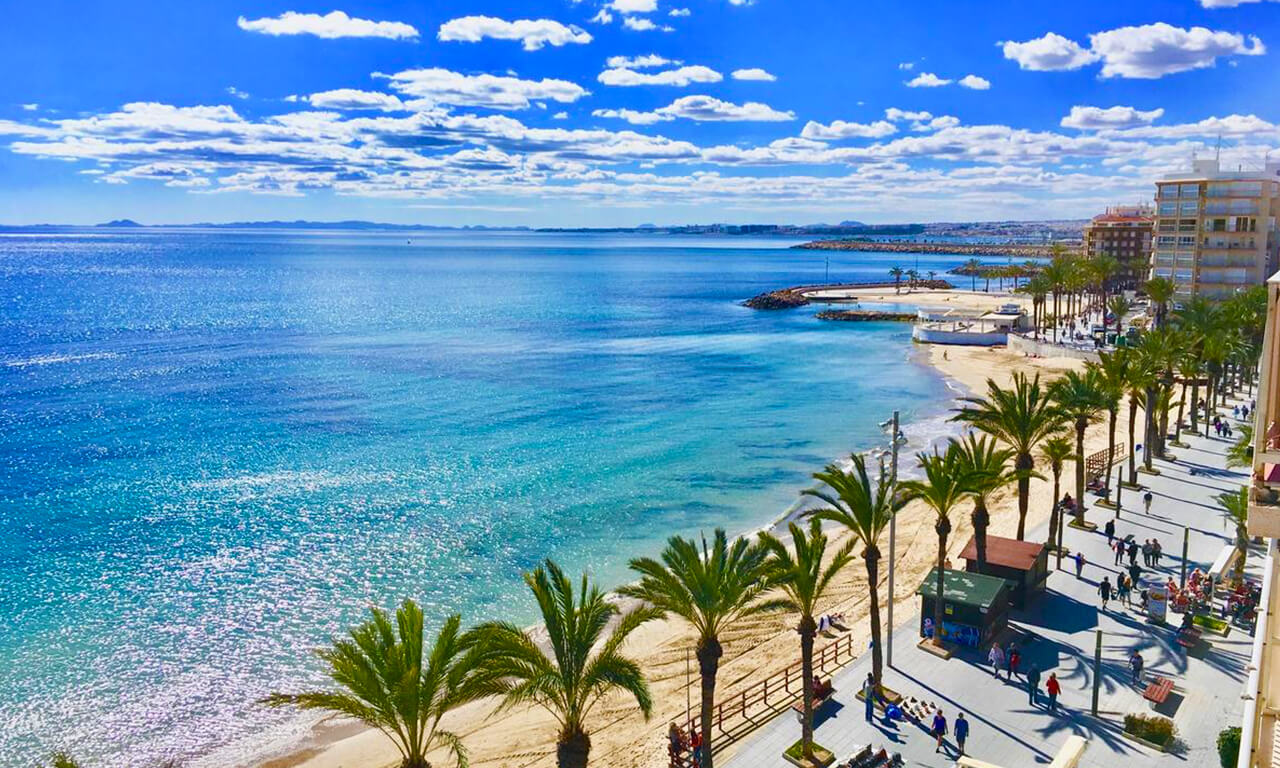 The city’s location is really unique. Occupying an area of ​​72 km², the city is washed by the Mediterranean Sea from one side, and by amazingly beautiful pink salty lagoons with healing properties on the other.

Such location is the real natural wealth of Torrevieja. Also, many rare birds live here, including the beautiful flamingos. The pink lakes create a favourable microclimate in Torrevieja, which is especially recommended for people suffering from respiratory diseases, allergies, and musculoskeletal disorders, as well as for pregnant women and children. 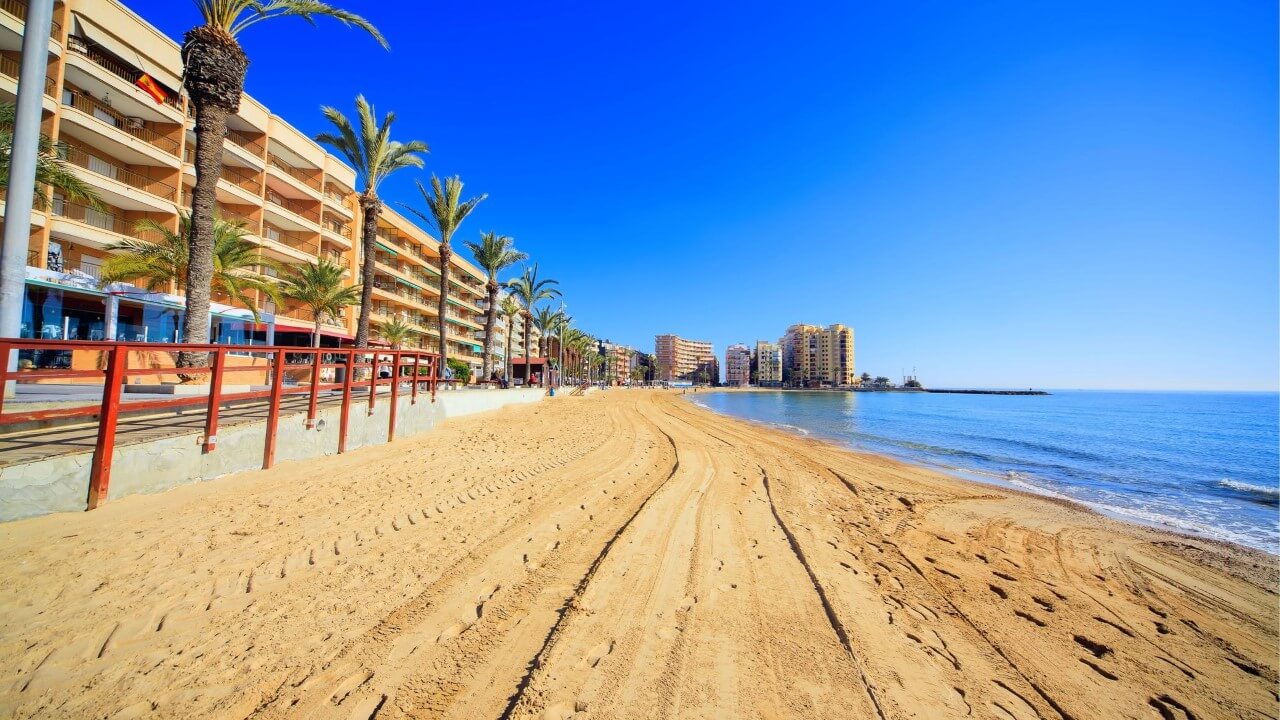 The local climate is just a fairy tale: 320 sunny days a year. The city is located in a unique place, protected from cold atmospheric fronts by mountains and hills. It is almost never cloudy or rainy here, to say nothing about snow. The average annual air temperature is +19 ℃.

The beaches in Torrevieja deserve special attention. Here they are first class.

The water temperature in the bays in summer is about +27 ℃;

Torrevieja offers you excellent beaches for all tastes, many of which have been awarded the blue flag for their impeccable cleanliness and well-developed infrastructure. You can also go snorkelling in the picturesque rocky coves.

Here are the main beaches of Torrevieja:

There are also many public and private schools in the city that teach in English and Spanish. 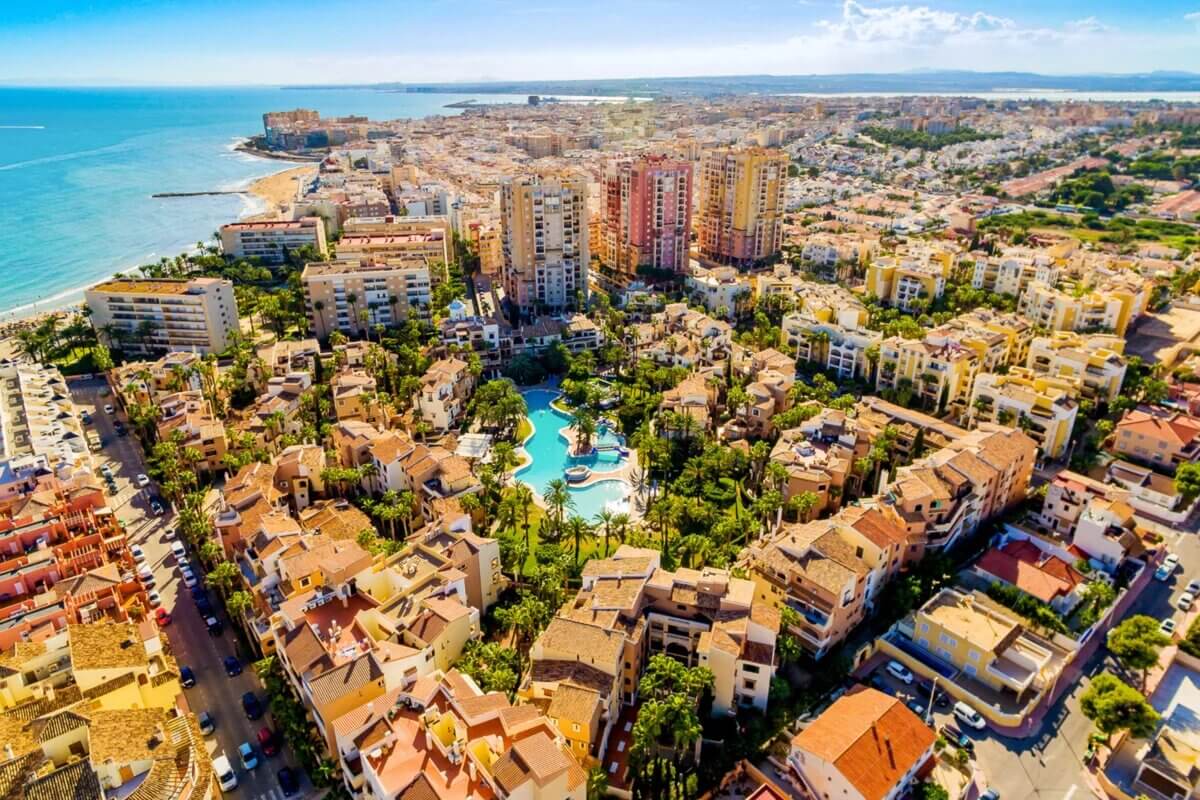 Medical care deserves special attention. There are both private and public clinics in the city where patients are received by multilingual doctors.

According to the World Health Organization, Spanish medicine is now ranked fourth on the planet, and this is the best indicator within the European Union. No wonder that living standards here are so high: men in Spain live on average 79 years, women — 85.

The city also possesses excellent golf courses. The region has 6 fantastic courses within a 10 km radius: 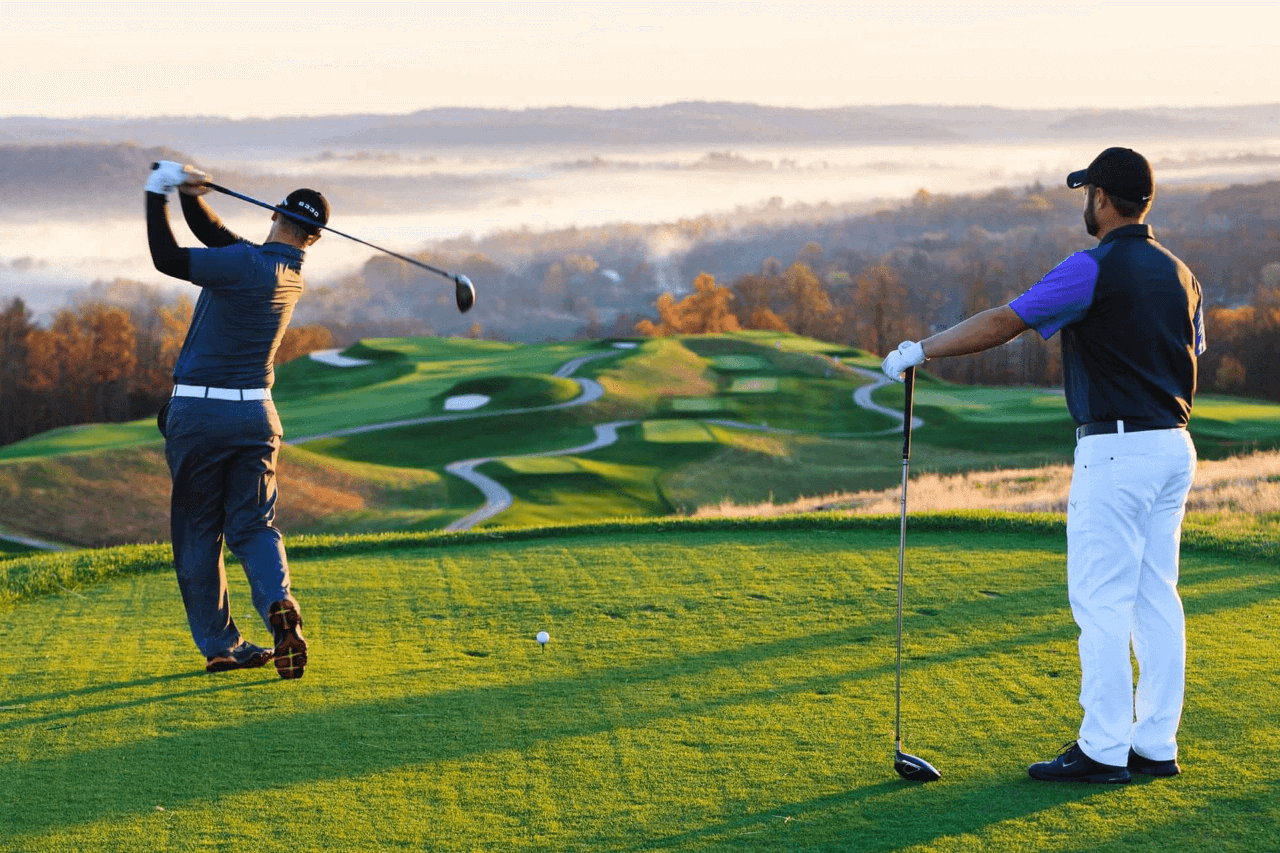 Thanks to these courses, Torrevieja attracts golf fans from all over the world.

A 10-15 minutes’ drive from Torevieja will take you to the best ports of Orihuela Costa adorned by true lovers of diving, kiting and, of course, sailing: 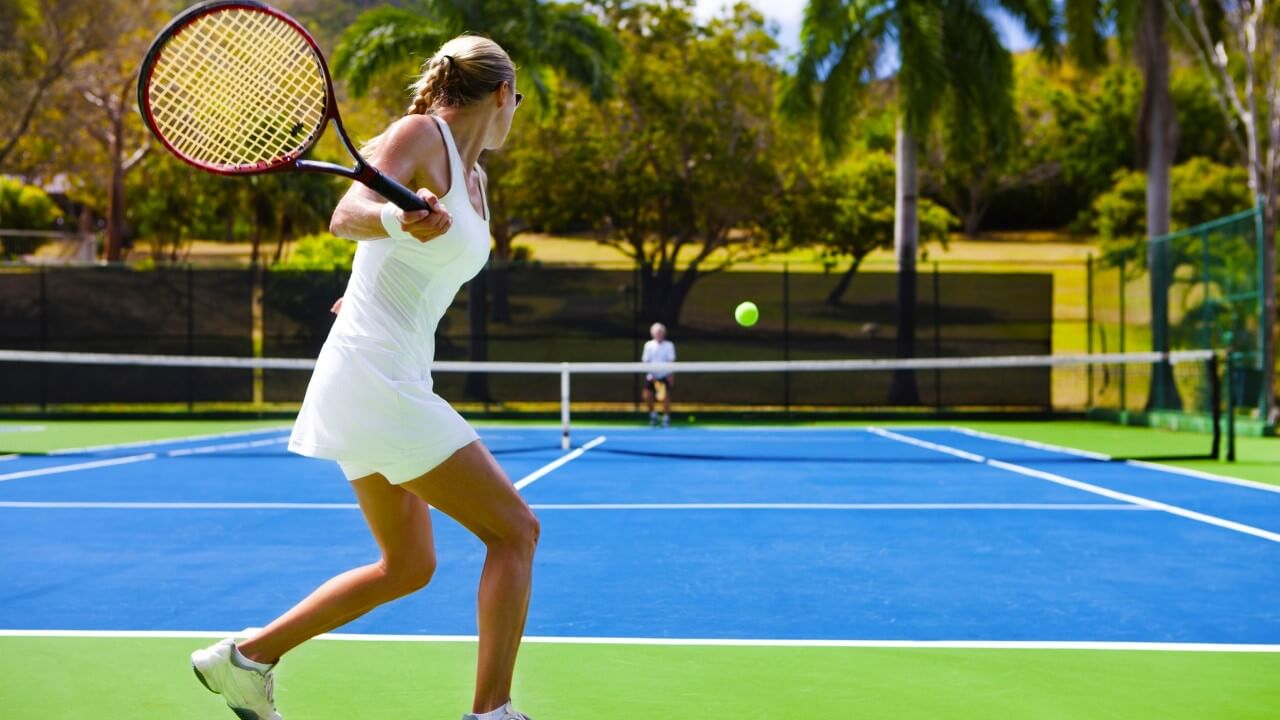 According to official 2019 data, about 100 thousand people live in Torrevieja. In terms of population, this city ranks third in the province of Alicante.

The population was largely replenished by foreigners accounting for more than 40% of the total number of permanent residents: British, Germans, French, Romanians, as well as Russians and Ukrainians.

During the summer season, the population of Torrevieja and its suburbs increases by almost 5 times. This resort city accommodates up to 400 thousand tourists every year, and this number is constantly growing.

The constant abundance of fruits and vegetables in both supermarkets and the local open market is sure to delight lovers of healthy food. Markets in Spain are not only a place to shop, but also a Spanish tradition, a culture rooted in the distant past, and it is in this city that one of the largest open markets in Spain is located. 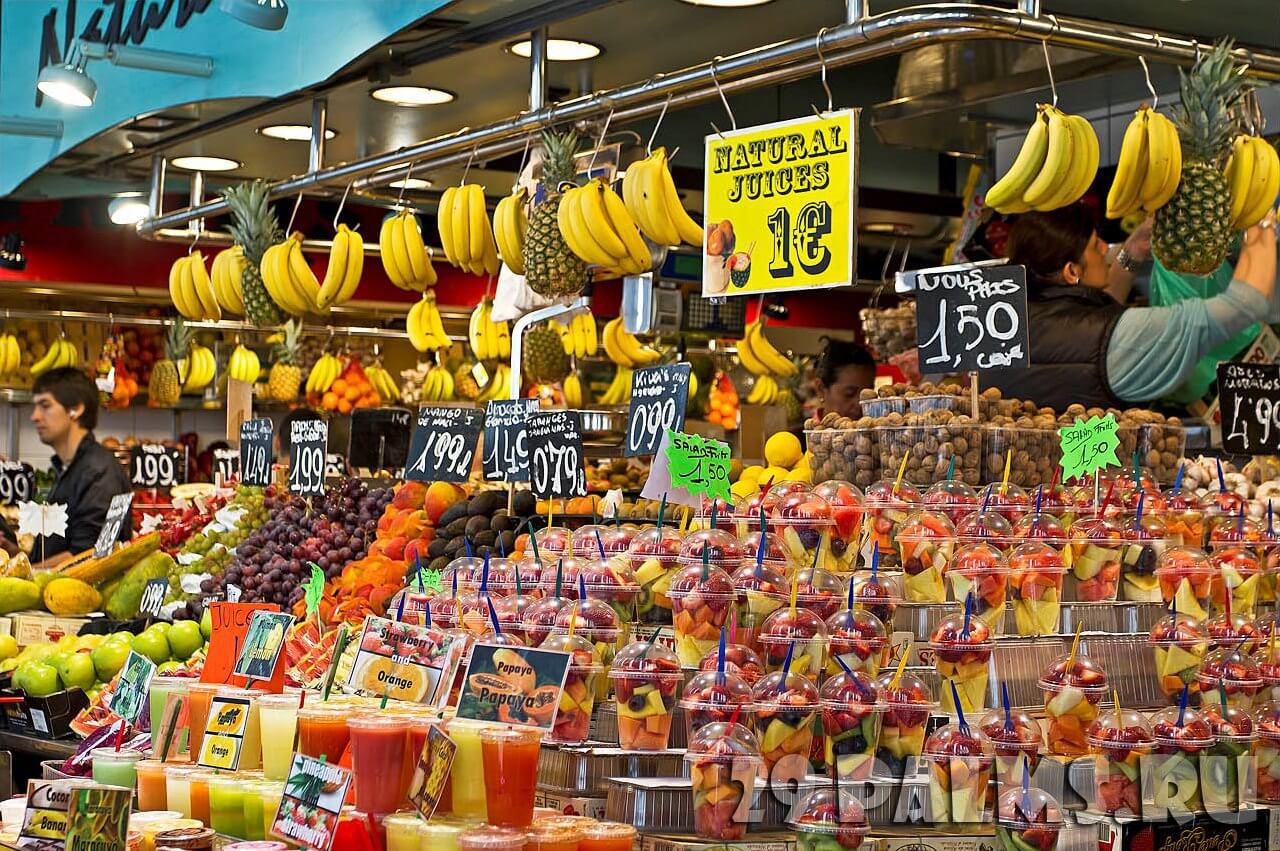 The AP7 and N332 motorways are close to the city, making it easy to get around Spain and Europe by car. Alicante Airport is 40 minutes away and Murcia Airport is only 30 minutes away.

Summary: yes, Torrevieja is one of the sunniest and most favourable corners of the Spanish Costa Blanca, which is undoubtedly suitable not only for a wonderful seasonal holiday, but also for permanent comfortable living with the whole family.
Did you like the article? Tell your friends!
Facebook Pinterest Linkedin Reddit Twitter

Author:
Nadine Apetroaey
All videos by this author
Author last videos
Top 10 facts about Spain Top 10 Things You Should Never Do In Spain TOP 7 things to do in Spain in 2022 (part 1)
Tags:
#Moving
WTG Spain uses cookies to ensure you get the best experience on our website More info
Start a conversation
Hi! Click to chat WhatsApp
Our team will answer you in few minutes
Nadine Apetroaey
English, Français, Română, Русский, Poland, Deutsch, Español, Українська
online